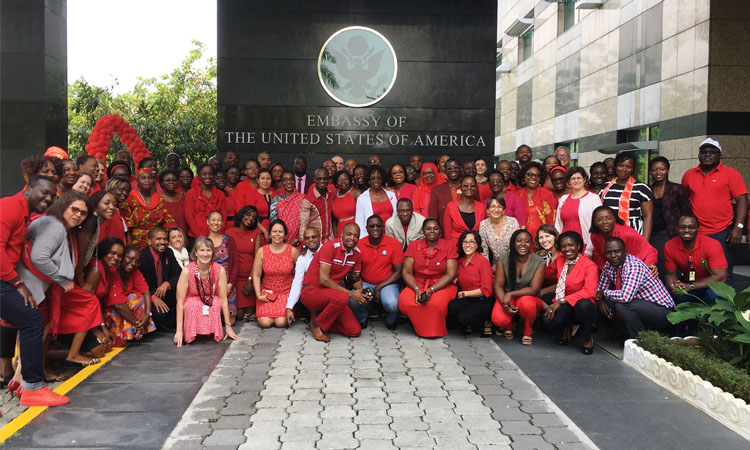 The U.S. government, through the U.S. President’s Emergency Plan for AIDS Relief (PEPFAR) has helped not only save and improve millions of lives, but also transformed the global HIV/AIDS response.  PEPFAR’s theme for  this year’s World AIDS Day is: Increasing Impact through Transparency, Accountability and Partnerships.  It highlights the historic opportunity to accelerate progress toward controlling, and ultimately ending, the HIV/AIDS epidemic as a public health threat.  Finally, it emphasizes the critical role of transparency, accountability, and partnerships in reaching these goals.

We are at an unprecedented moment in the global HIV/AIDS response.  For the first time, we have the opportunity to change the very course of a pandemic by controlling it without a vaccine or a cure.  Controlling the pandemic will lay the groundwork for eliminating or eradicating HIV, which we hope will be possible through the future scientific breakthroughs of an effective HIV vaccine and cure.

The Strategy reaffirms that the U.S. government, through PEPFAR, will continue to support HIV/AIDS efforts toward achieving epidemic control, ensuring access to HIV services by all populations, including the most vulnerable and at-risk groups.

The U.S. government continues to lead the way in the global HIV/AIDS response.  But no one country or entity alone can end the AIDS pandemic.  We are proud to partner with governments, the private sector, philanthropic organizations, multilateral institutions, civil society,and faith-based organizations, people living with HIV, and many others in this work.  Through this collective effort, we expect to reduce the future costs required to sustain the HIV/AIDS response. In Côte d’Ivoire, the PEPFAR team maintains excellent relations with representatives of the Ivorian government, the UN family, and other multilateral/bilateral partners, as well as a strong civil society engagement through regular meetings.

The U.S. government’s leadership and commitment are a direct reflection of the goodwill, compassion, and generosity of the American people.  Through PEPFAR, the United States has invested about $1.4 billion over the past 13 years to support the HIV/AIDS response in Côte d’Ivoire.  As of September 30, 2017, PEPFAR has supported lifesaving antiretroviral treatment (ART) for 253,297 people, including 10,854 children, provided HIV counseling and testing to 1,361,701 people, and offered care for 299,304 Orphans and Vulnerable Children affected by HIV and their families.  But we have much more work to do, to find, treat, and help tens of thousands of Ivoirians who continue to suffer from HIV/AIDS.  This advancement here in Côte d’Ivoire is essential to controlling this scourge.

We are closer to controlling the HIV/AIDS pandemic than ever before – What once seemed impossible is now possible.  Through transparency, accountability, and the power of partnership, we can accelerate progress toward reaching our goals.