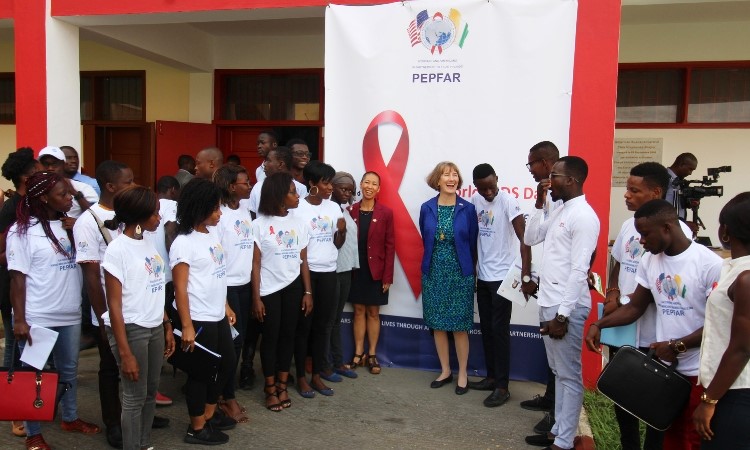 We gather here today for the U.S. Embassy’s launch of World AIDS Day 2018, which officially takes place this Saturday, December 1.  World AIDS Day, as you know, is a day to remember the people whose lives were lost to this terrible disease, as well as a day to celebrate those who have been able to overcome HIV and lead fruitful lives.  And we cannot forget those who have worked night and day to ensure that those infected had access to treatment and care.

This year marks the 15-year anniversary of the United States’ support to fight HIV and AIDS through the U.S. President’s Emergency Plan for AIDS Relief (PEPFAR).  Over the past thirty-seven years, the HIV pandemic has devastated countries and communities around the world.  Fifteen years ago, the government of the United States saw the urgent need to transform the global response to HIV and AIDS, and created PEPFAR.  The generosity of the American people has saved more than 16 million lives to date, prevented millions of HIV infections and brought the world closer than ever to controlling the HIV pandemic – community by community, country by country.  In Côte d’Ivoire, the U.S. Government has invested nearly $1.5 billion since 2014, to help the country achieve control of HIV.

Fifteen years ago, when the United States launched PEPFAR, HIV was a death sentence in many parts of the world.  Now, for the first time in modern history, there is the opportunity to make what once seemed impossible possible – controlling a pandemic without a vaccine or a cure.   HIV is no longer a death sentence; it is manageable disease, like asthma, diabetes or hypertension.  When we talk about people living with HIV, we mean it literally:  they are living with HIV!

The first step in controlling this epidemic, however, is finding people who are HIV-positive, and then ensuring that they receive life-saving treatment.  Finding people means getting people at risk of HIV to get tested and know their status.

So, I encourage everyone, but specifically those who are vulnerable for contracting HIV, to know your status as soon as possible.  If you test negative, follow safe practices to remain HIV-negative.  If you test positive, please seek treatment as soon as possible to protect not just yourself, but also those with whom you are intimate.  This is the motto of the Government of Côte d’Ivoire for World AIDS Day this year:  Savoir tôt pour traiter tôt.

PEPFAR focuses on the populations that data show are often left behind – such as young women and younger men, children, men who have sex with men, and female sex workers.  All age groups, genders, and at-risk groups should be able to know their HIV status, receive lifesaving HIV prevention and treatment services, and have their viral load suppressed if they are HIV-positive.

Around the world, hope and life are prospering where death and despair once prevailed.  A generation that could have been lost is instead thriving and building a brighter future.  We look forward to continuing to build that future with all of you.