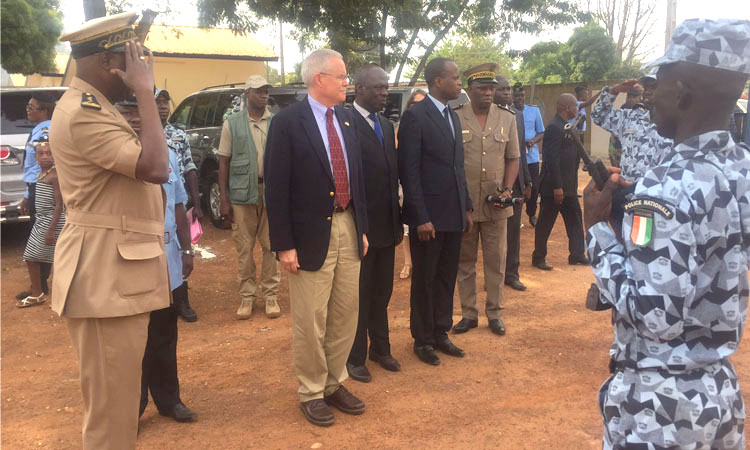 U.S. Embassy Visit to Western Cote d’Ivoire: Focus on Peace and Security ahead of Legislative Elections

Abidjan – U.S. Chargé d’Affaires Andrew Haviland led a delegation to western Cote d’Ivoire from December 8-10, 2016.  A region hard hit by the post electoral crisis in 2010-11, the U.S. Embassy in Abidjan has made the west a focal point for many programs to support Ivoirians as they continue to recover from crisis and make progress in rebuilding the country’s democracy and economic prosperity.

Foremost amongst these initiatives is a community policing program that aims to rebuild the trust among community residents and the local security forces.  Through this program, financed by the U.S. Department of State, 100 police officers in Man, Biankouman, Danané, Duékoué, Toulepleu, and Guiglo police commissariats have been trained in community policing to provide a secure environment that upholds the rule of law and respects human rights.  Another key element of this community policing program is to improve the responsiveness of police forces to residents’ complaints.  On this visit, the delegation had the opportunity to meet with a range of civil society groups who stated that the police’s responsiveness to their concerns had increased considerably.

In his remarks during a ceremony to handover police equipment and inaugurate a training room, Chargé Haviland said, “Especially as we approach the legislative elections next week, I urge you all to use the campaign period to spread messages that further peace, inclusiveness, and economic growth.  There are not enough seats for everyone who is running, but that doesn’t mean that everyone can’t win.  When peace is maintained, everyone wins.  When people can create and grow economic opportunities, everyone wins.  And when people of different political allegiances and ethnicities are working together to build a more secure environment, everyone wins.”

The Embassy delegation visited several other projects that have received support from the U.S. government, notably in the sector of improving economic opportunities and access to health care.  The delegation visited a medical supply warehouse funded by the U.S. Agency for International Development that provides a critical link in the supply chain of delivery of medicines, including drugs to treat HIV/AIDS and malaria.   Another visit featured U.S government support for a women’s cooperative that grows and sells rice, thereby encouraging the self-sufficiency of the women and their participation in Côte d’Ivoire’s growing economy.  Both of these projects support the idea that a healthy and empowered workforce will lead to a more prosperous Cote d’Ivoire.

The delegation also visited a U.S funded project in Duékoué that will support income generating activities for 150 repatriated refugees through proceeds from a poultry farm they are building.  This project is run by Platform of Youth Organizations of Duékoué (POJeD) and aims to implement activities that promote social cohesion amongst the returned refugees and the residents of Duékoué.

This high level visit of the U.S Embassy Chargé d’Affaires allowed Embassy officials the opportunity to interact with many facets of Ivoirian society, including local officials, security forces, and civil society group, as well as a chance to see how the country is working towards strengthening democracy and economic prosperity beyond Abidjan.  The U.S. Embassy recognizes that much work remains to be done to achieve these goals, but is encouraged by the results witnessed during this trip to the west and committed to remain an active partner to Cote d’Ivoire.