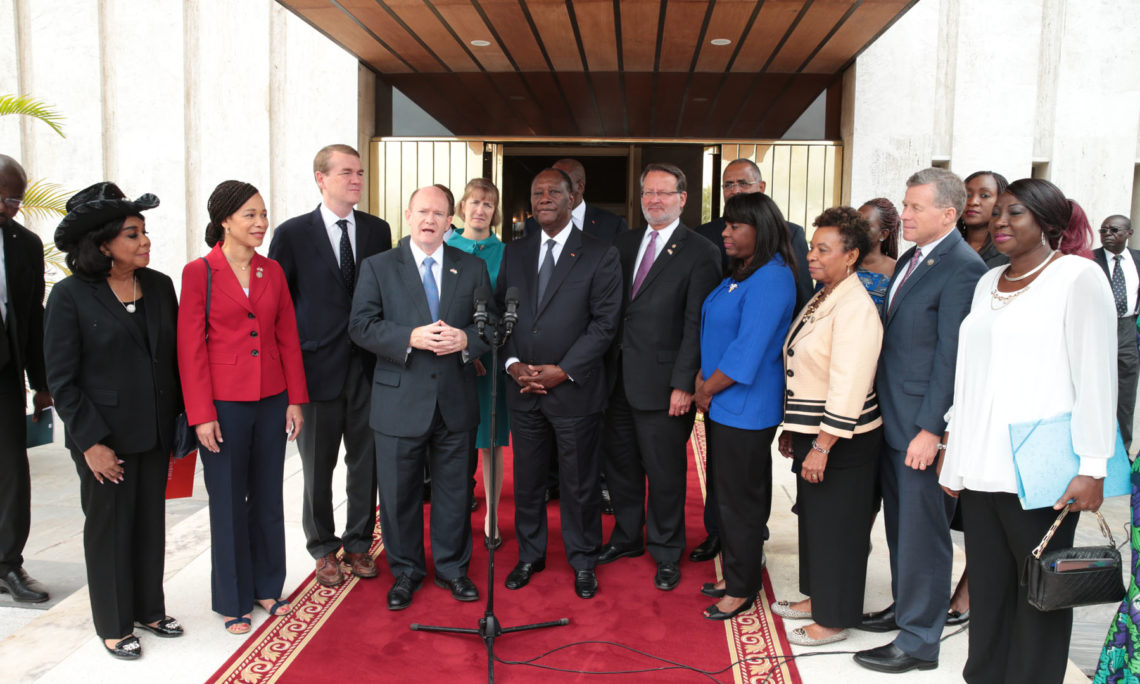 September 2, 2017 (ABIDJAN) – An eight-member Congressional delegation led by Delaware Senator Christopher Coons expressed its strong, sustained commitment to Côte d’Ivoire in a two-day visit that ended on Saturday with a meeting with President Alassane Ouattara.

“We have a simple message:  We are committed to our partnership between the United States and Côte d’Ivoire and to the sustainment of valued programs such as PEPFAR and the Millennium Challenge Corporation,” said Senator Coons, referring to the President’s Emergency Plan for Aids Relief (PEPFAR), which provides the majority of all HIV treatment services in Côte d’Ivoire, and an expected compact this fall with the U.S. Millennium Challenge Corporation (MCC). The compact will provide grants worth CFA 290 billion ($525 million) to rehabilitate key roads in and around Abidjan and invest in vocational education.

“We are visiting from both political parties and from both chambers of the U.S. Congress,” Senator Coons added. That fact underscores the U.S. bipartisan support for Africa and Côte d’Ivoire in particular, he added.

Coons, one of Africa’s most ardent supporters in the U.S. Congress, was visiting Côte d’Ivoire for the first time, though he has visited Africa more than 25 times since he spent a semester at the University of Nairobi in the 1980s. It is the largest U.S. congressional delegation visit to Côte d’Ivoire since the conflict in 2011.

In all his meetings, Coons stressed the importance of U.S. academic and professional exchanges and other programs such as the Young African Leadership Initiative (YALI), which have brought thousands of Ivoirians to the United States. More students attend U.S. universities from Côte d’Ivoire than any other Francophone African country.

The visit was part of a regional tour that included stops in Nigeria, Ghana and the Gambia. In Agboville, Senator Coons saw a firsthand example the impact of the U.S. government’s investment in strengthening the Ivoirian healthcare system, valued at almost CFA 400 billion ($200 million) in the next fiscal year. The site provides quality rapid HIV testing.

During a visit to a cocoa farm, the delegation learned more about the realities that cocoa farmers face and engaged in a dialogue with the community in Offa village about economic issues and strategies to ensure that the producers of Côte d’Ivoire’s largest export are benefiting financially.

“It has been a fantastic visit,” Coons said, before departing.

Included in the Delegation were: