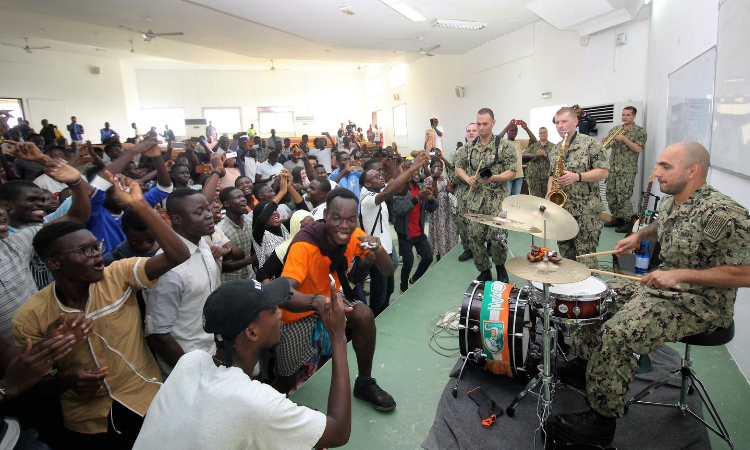 The U.S. Naval Forces Europe Band’s New Orleans brass band, Topside, which accompanied the USNS Carson City ship’s to Abidjan, had several engagements ranging from a live radio interview and performances on three Ivorian radio channels to a concert at the local university. The channels include Radio Al Bayane, a Muslim radio station with the largest coverage in Côte d’Ivoire, as well as Radio de la Paix (a former United Nations (UN) radio station) and Radio Yopougon. The interviews featured Essi Amegee and Bertrand Kre, two American navy officers who are originally from Togo and Côte d’Ivoire respectively. “We feel very fortunate to be representing the U.S. working with our Ivorian partners,” said Chief Musician Justin Belka. “We enjoyed our time alongside their musicians, creating memorable experiences for both us and the audiences at each performance. We hope our small part of the mission has a positive impact on the community here in Cote d’Ivoire.” To close their activities in Cote d’Ivoire, the U.S. Navy Band performed at a big concert at Felix Houphouet Boigny University organized by U.S. Embassy Abidjan. Hundreds of enthusiastic students attended and danced at the concert for over an hour.