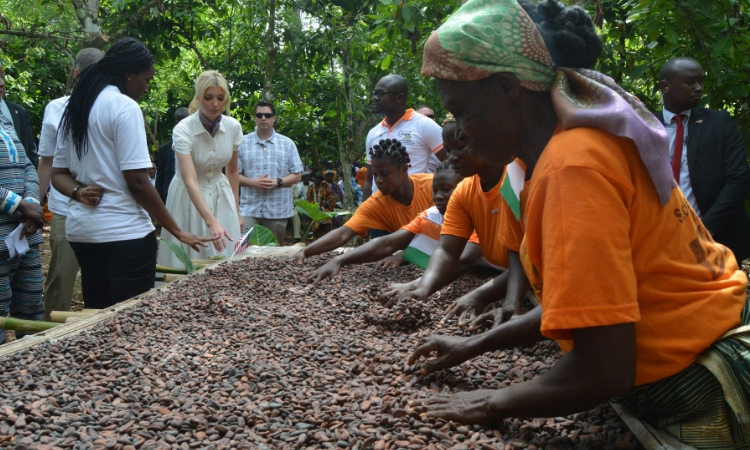 ABIDJAN – Advisor to the President Ivanka Trump and USAID Administrator Mark Green met female cocoa farmers and entrepreneurs at a cocoa farm in Adzope, Côte d’Ivoire. The delegation heard from the women about the process of producing cocoa and the economic challenges they face. They discussed the ways in which the Women’s Global Development and Prosperity (W-GDP) Initiative could support an environment for similar women’s cooperatives to overcome challenges and thrive.

The delegation announced a renewed public-private partnership through USAID’s W-GDP fund and the World Cocoa Foundation for $2 million, which will catalyze private sector investment in women workers of the cocoa industry. In this second phase of the project, USAID will deepen its partnership with the cocoa industry in Côte d’Ivoire, Ghana, Nigeria and Cameroon to improve the productivity and sustainability of cocoa production, as well as support the economic empowerment of women farmers.  Collectively, this region’s estimated 2 million smallholder cocoa farmers produce approximately 70% of the world’s supply.  Firms involved in the partnership include Barry Callebaut, Blommer Chocolate, Cargill, The Hershey Company, Mars Wrigley Corporation, Mondelēz International, Nestlé and Olam. Catalyzing support from private sector partners, in collaboration with the U.S. Government, is a fundamental component of W-GDP.