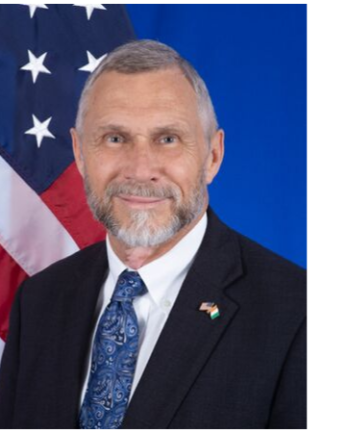 Richard K. Bell, a career member of the Senior Foreign Service with the rank of Counselor, was sworn in as Ambassador to Côte d’Ivoire on September 3, 2019.

From September 2018 until August 2019, he served as Chargé d’Affaires, a.i. of the U.S. Embassy in N’Djamena, Chad.  Prior to that temporary-duty assignment, he was the Foreign Policy Advisor at the US Africa Command (AFRICOM) in Stuttgart, Germany from September 2015 to August 2018.

Since joining the Foreign Service in 1991, he also served in the United Kingdom, Kuwait, Ethiopia, Madagascar, Washington, DC, Haiti, and Israel.

He worked for Catholic Relief Services from 1980 until 1988, successively in Yemen, Jerusalem/West Bank/Gaza, Egypt and Tunisia.  He was a Peace Corps Volunteer (English teacher) in Yemen 1977-79.

He received his MS in Management from Boston University and his BA in French from Pennsylvania State University.

His foreign languages include fluent French and semi-fluent Arabic, with smatterings of Hebrew and Haitian Creole.