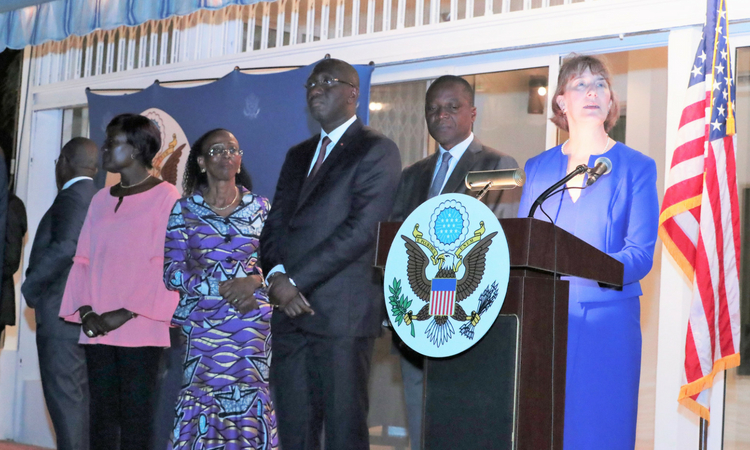 It is a pleasure to welcome so many friends here today as we celebrate the 242nd anniversary of American independence.  Before I get started, I’d like to salute the presence here tonight of a large delegation from the President’s Advisory Council on Doing Business in Africa.  This is the largest visit by a trade delegation to Côte d’Ivoire in at least a decade, and their presence is a true indicator of the increasing U.S. commercial relationship with Côte d’Ivoire and West Africa.  We’re proud that Côte d’Ivoire is one of four countries this group of prominent business leaders chose to visit.

I arrived in Côte d’Ivoire just ten months r ago, and in this period I’ve seen an increasing amount of activity from U.S. business, many of whom generously supported this event.  Thank you all very much.

This last year has been an incredible one for me.  I have travelled the country, and I have seen with my own eyes the depth of our partnership.

Out in Bondoukou, I met cashew entrepreneurs giving jobs to female workers.

In Man, I met women and police who are working together to improve security for their communities.

On my bicycle on the road to Grand Bassam, I was joined by Minister Touré to demonstrate our solidarity against terrorists on the second anniversary of the Grand Bassam attack.

All over the country, I have met people who, like me, are devastated that our national teams, both the United States and Cote d’Ivoire are not playing the World Cup.

In Gagnoa, just a few weeks ago, I met civil society members like Dr. Marie Paul Kodjo, who was working to encourage villagers and citizens to exercise their right to vote and demonstrate that the politics of the empty chair is worse than empty.  It hurts democracy.

Today, on this day celebrating our independence, we Americans think a lot about democracy.  The United States is proud to be among the world’s oldest democracies, and over the course of these many years, we’ve learned a thing or two.  If you’ll permit me, I’d like to reflect on them.

First, we’ve learned, as Marie Paul and so many others have learned, that Democracy is about participation – it is not spectator sport.  Citizens must be involved, and they have both a right and a duty to hold their elected officials accountable.  Let’s be honest; without a clear signal from their constituents, politicians in any country will tend to pursue their own agenda.  A vibrant civil society and a free and independent media are essential to ensuring a well-informed electorate.  Citizens who sit on the sidelines are abdicating their civic duty.

Second, we’ve learned that democracy is about institutions.  Representative bodies that reflect the will of the people and uphold the constitution.  We Americans are fiercely proud of our own Constitution, which is our guiding force.  The oath of office in the United States, for example, requires us “to protect and defend the Constitution of the United States, against all enemies, foreign and domestic.”  Our faith in strong institutions and guiding foundational documents has been bolstered by our national experience.  We’ve weathered a civil war, a civil rights crisis, controversial participation in foreign wars, the impeachment of presidents – and yet our republic stands.  Our institutions are a big part of that.

We’ve learned that free speech is hallmark of a healthy democracy.  Almost without exception, we favor the right to express one’s views– no matter how vigorously we might disagree with them – over suppressing free speech.  Indeed, preserving peaceful outlets for expression – through media, written and spoken word, and public demonstration – keeps discourse in the open.  Restricting expression forces individuals and groups underground and can lead them to express themselves through more dramatic – and often violent – means.

We’ve learned that democracy is about rights and responsibilities, though we tend to talk more about the former and less about the latter.  Of course, we have the right not to vote if we so choose, but we should cherish the rights democracy gives us:  to speak, to vote, to participate, and exercise our responsibilities as citizens by voting, speaking out, and participating in civic life.  Democracy is not perfect.  Winston Churchill went so far as to say the “democracy is the worst form of government, except for all the others.”  So, as we mark 242 years of American Independence, rather than lament long lines on election day, or seemingly endless debates in Congress or Parliament, let us celebrate the fact that we can vote, and that our laws are decided by elected officials who engage in spirited discussion.

And perhaps the most important thing we’ve learned in our 242 years of independence is that democracy is a work in progress.  As Abraham Lincoln famously said, government is of the people, by the people and for the people.  But what the people want changes.  In this sense, democracy is rejuvenating.  We see this more and more across the world.  Unheard voices have spoken at the ballot box, and this in turn has inspired others to get involved.  People in the United States — across the political spectrum—are becoming activists on issues important to them.  Young people are mobilizing to take on the gun lobby; women are running for office in unprecedented numbers.  The conversations are not always easy, and sometimes the positions are poles apart, but it is clear that democracy is alive and well in the United States.

In Côte d’Ivoire also, positions among people are far apart, but that didn’t stop 400,000 people from registering to vote, so they can do their part for this democracy.  My warmest congratulations go to Ivoirians and the Government of Côte d’Ivoire for the successful voter registration drive last week.  Those Ivoirians have joined the ranks of those determined to be part of democracy in action in Côte d’Ivoire, and hopefully millions more will join them in the coming years.

With that, please join me in a toast: To partnership, to participation, and to democracy in progress! Thank you!